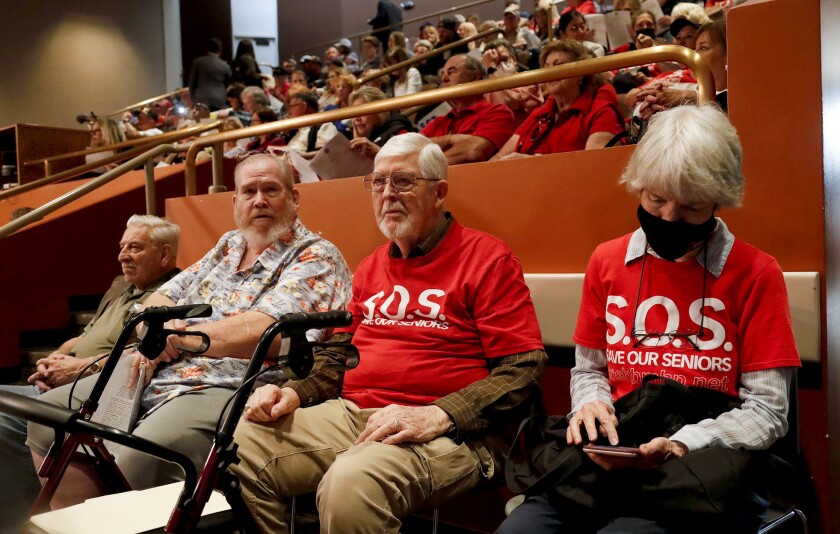 Good morning and welcome to the TimesOC newsletter.

Anaheim continues to reel from the explosive news weeks ago that the FBI is investigating a secret “cabal” that runs the city.

Since the corruption scandal was uncovered, former Mayor Harry Sidhu stepped down from the council and council members voted to terminate an Angel Stadium deal that Sidhu may have pushed through in exchange for a million dollars toward his campaign.

This week, my colleague Gabriel San Román wrote about the decision, and indecision, of the City Council as it addressed the corruption issues during a meeting this week.

The council could not agree on how to replace Sidhu’s empty seat ahead of the November election. The two choices appeared to be either to appoint a new mayor or call for a special election. Some members of the public proposed appointing Councilman Jose Moreno to the role. Moreno has been on an island in the conservative council and staunchly opposed many of Sidhu’s policies, including the Angel Stadium deal. Moreno made a motion to become mayor, but he wasn’t supported by his colleagues, a common exercise on the Anaheim dais.

Ultimately, the council decided to revisit the issue at a later meeting.

Since the corruption scandal broke, Moreno has proposed campaign finance reform and brought back an ordinance this week that was first proposed in 2019. San Román wrote that the ordinance would require council members to sit out on votes involving donors who have contributed more than $250 in the past 12 months and prohibit contributions from potential donors another 12 months after a related vote, among other items.

“The essence of this law is that if someone has a financial interest in our city and they gave you money to be elected, in the public’s eye, that’s suspect,” Moreno said. “Harry Sidhu was going to ask for a million dollars if he got this [Angel Stadium] deal done.”

The council debated the issue for about an hour and decided to bring it back for further discussion later this month.

Prior to the meeting, Sidhu’s attorney Paul Meyer issued a statement regarding his client’s campaign finances.

“A fair and impartial review of all campaign contributions related to Harry Sidhu will confirm every contribution was properly accounted for and in compliance with campaign finance requirements,” Meyer’s statement read. “We urge the city and everyone to avoid political spin in a matter which is still under investigation with no charges filed.”

Councilman Stephen Faessel seemed to echo the statement when he said that there wasn’t any “meat” in the audit document.

Moreno then proposed that an audit should be conducted of each council members’ campaign contributions. Council members voted unanimously to direct staff to draft a request for proposals to contract with an independent firm for the audits.

“It’s not just a financial audit of who gave contributions, who got contracts, but do we really know that money went where it was supposed to go?” Moreno said.

— Daniel Bondarenko fled Ukraine in the early ’90s with his wife and kids during the fall of the Soviet Union. Though he’s worked as a nurse in Orange County since then, he still cares deeply for the people of his home country. He has been sending medical supplies back to Ukraine to help people who are being wounded in the war sparked by a Russian invasion a few months ago. He’s hoping to start a nonprofit to provide medical care for people in war zones all over the world.

— A coalition of Huntington Beach seniors who live in mobile homes are concerned that the city won’t support their efforts to establish a carveout for mobile homes from the city’s ordinance against rent control. Dozens of members of the group held a protest in front of the City Council chambers this week to draw attention to the issue, my colleague Matt Szabo wrote. They are hoping that the city will place the issue on the November ballot.

— On a similar note, Latino renters are urging Costa Mesa City Council members to control rent hikes. About two dozen residents held a demonstration outside of City Hall this week. “We need you guys to do justice for the people you represent because you also represent us,” said Juana Trejo, a renter for the past 20 years. “We also pay taxes, and we also deserve to live with dignity and without fear.” Reporter Sara Cardine has the story.

— Following a brutal campaign, Newport Beach voters this week voted against a measure that would have allowed residents to vote for their mayor. Instead, the mayoral position will rotate annually among members of the City Council, as has been the longstanding tradition, wrote Lilly Nguyen. The contentious issue reached its height last weekend when a video was circulated online depicting an actor purportedly portraying a council member who was a proponent of the measure being shot multiple times. The committee leading the effort against the measure denied having anything to do with the video.

— There are many brunch spots throughout Orange County, but the owners of Paragon Cafe in Costa Mesa are hoping their restaurant will be the go-to brunch spot in the county. The restaurant has two outdoor dining areas, a full bar and classy blue-velvet seats. The goal is to refine brunch dishes to elevate the breakfast menu. For this, the restaurant uses unique recipes with quality ingredients, wrote my colleague Sarah Mosqueda.

— UC Irvine student and model Rahan Alemi has been embracing wearing a hijab while posing for Muslim-owned fashion brands. Alemi said she feels empowered by the head scarf and the meaning behind the religious garment. It has become an important part of her wardrobe while modeling for modest clothing companies. Initially, when she started wearing one, she was concerned of how she might be treated due to prejudices against Muslims. “I had been wanting to wear hijab for a couple years, but I never had the courage or strength to actually follow through with it, with the way society is. I was honestly scared of how I might be treated or the opportunities I may lose because of judgment and stereotypes,” said Alemi.

— Ham Tran, a film director who grew up in Santa Ana, was grieving from the death of his mother when he was approached with a new project. The outline for the film, “Maika: The Girl from Another Galaxy,” instantly struck a chord with him. Like Tran, the main character of the story recently lost his mother.

— Few ships have sunk as fast as the Angels. The team started this season with much promise, putting together some exciting wins. But the Angels are currently embroiled in the team’s longest losing streak in its history. The team also fired manager Joe Maddon this week amid the slump.

— It isn’t yet clear who the Angels will choose as Joe Maddon’s replacement. Assistant sports editor Steve Henson wrote that interim manager Phil Nevin will likely keep the job if the team pulls it together and makes the playoffs. He also walked through a few of the potential candidates for the job.

If you have a memory or story about Orange County, we would love to read it (please keep your story to 100 words or less).

We want your help in making this the best newsletter it can be. Send any tips or comments to benjamin.brazil@latimes.com or carol.cormaci@latimes.com.

Did someone forward you this? Sign up here to get the TimesOC newsletter in your inbox, or invite a friend or family member to join.