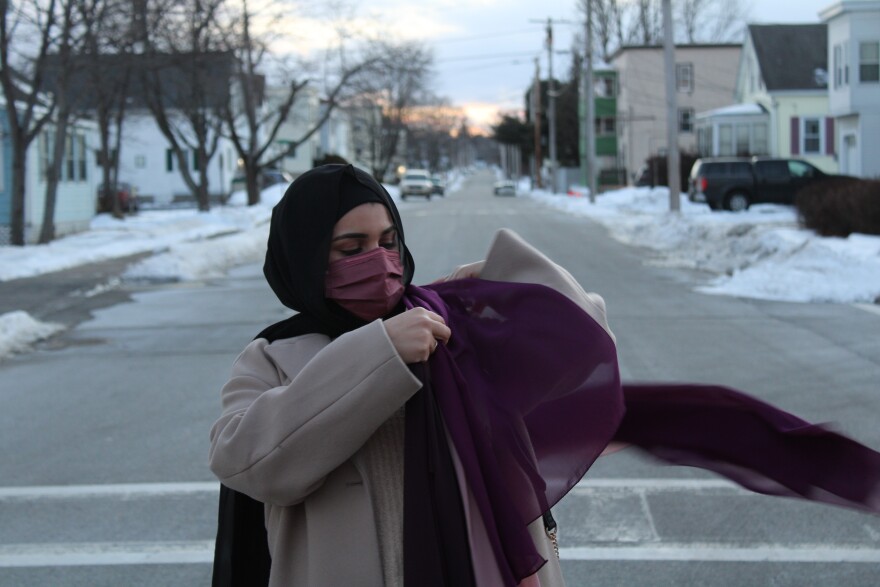 In a spare classroom at the adult education center in Biddeford, Israa Enan opened her handbag and gently pulled out a light pink hijab. Then she pulled out a purple one, and a dark red one – three samples from her clothing startup, Muharah Collection, that she launched with a friend in November.

Enan, who is originally from Iraq, said getting into the fashion business was a major career change. She studied health sciences in college, and last year got a job in a dental clinic.

“I was like oh my god yes finally I’m gonna use my certificate to work,” she remembered thinking. “I’m gonna try to make money, it’s a good place.”

But not long after she started, she said her employers asked her to replace her hijab with a surgical hat and a smaller head covering underneath, supposedly to match her scrubs.

Enan said she agreed at first, wanting to fit in.

So, after several months at the clinic, she put in her notice.

“After what I went through, after seeing my friends taking their hijabs off, I want to do the opposite. I want to start wearing a hijab more,” she said.

And, she said, she wanted to help other Muslim women in Maine feel a similar pride in their hijabs. One problem, she said, is that the modern styles that she and her friends are looking for just aren’t available in Maine.

“Let’s say we find a place here – they have limited options. Mostly old fashions,” she said. “And, you know, it’s a new generation. They want good stuff.”

Seeing an opening in the market, she teamed up with her friend Qamar Hussein, who has a background in fashion, to launch Muharah Collection, and began importing hijabs from Turkey this past November.

Al Abboodi is from Iraq, and her family has lived in Maine for about ten years. Al Abboodi said she and her friends who are also in their 20s are looking for a specific style of hijab – generally lightweight fabric and softer colors that are easy to match with various outfits.

Until recently, she’d done most of her hijab shopping online. But, she said, the colors wouldn’t always come as advertised, and she was not impressed with the quality.

“I washed them once and they’re gone,” she said. “They’re torn apart.”

Now, she said Muharah Collection offers the soft colors and high quality, lightweight fabrics that she likes. And she can visit Enan and pick out her hijabs in person – she said that’s a big deal for her group of friends.

“It’s really exciting. And again, we all supported her, and we all will still support her because we need those,” Al Abboodi said with a laugh.

And Muharah Collection isn’t the only new local business trying to appeal to a Muslim clientele.

On a recent morning at the public library in Westbrook, Israa Enan’s older sister, Iman, and her business partner Muna Mahmoud laid out gold bracelets, necklaces, and rings, many of them inscribed with Arabic phrases. It was the first collection from their new business, Foi Jewelry. Mahmoud, who was born in Saudi Arabia but whose family is from Somalia, said she has a personal connection to the merchandise.

“Growing up in Arabic culture, when I see [that] these jewelry have some Arabic writing on them, it really feels like I’m home,” Mahmoud said.

Iman Enan, who is from Iraq, said she sees the jewelry business as a subtle, but public, way of building community. Since launching the business earlier this month, she said it’s already helped her meet more Arab women.

“A lot of women reached out to me, and I didn’t know they lived in Maine. I was so surprised,” she said. “So I feel like this is the first step.”

Meanwhile, her younger sister Israa Enan said her new line of hijabs are selling briskly, and she’s already expanded her offerings to include dresses and custom-designed hoodie sweatshirts.

And while it’s still early, she said she’s seeing some signs of success in her mission to help other women and girls feel excited about wearing hijabs.

“I saw some girls, they were like ‘Oh we’re wearing you’re hijabs!’ I was like this is cute! This is so nice,” Enan said with a smile, “I just felt proud.”