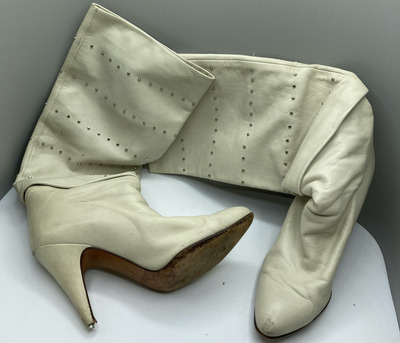 I’ve had slow-fashion shoes on my mind for about a month now — ever since I took a long-delayed trip to Cobbler Concierge for some shoe repairs. I used to take shoes in need of TLC to “the guy around the corner.” (There’s always a guy around the corner in New York City.) But I’ve had mostly unsatisfactory results from that over the years, despite trying a number of guys on a number of corners. After spending a lot of time perusing online reviews, I set out for Cobbler Concierge with four pairs of shoes, including my mother’s off-white, studded boots from the 1980s. These boots were a hot mess with a broken heel, scuffed toes and general staining.

Behold the improvement! By the way, the before and after photos were both provided by Cobbler Concierge. (Note: This is NOT a paid ad! I paid them … to fix my shoes.)

These boots have been in my possession since at least 2007, when they made an appearance in my blog post about the sexism underlying certain critiques of fashion.

The heel has been missing for who-knows-how-long, so I’m excited to be able to wear them again.

Clockwise from top left: Vivienne Westwood animal shoes from 2011; sequin sneakers from 2010; Prada patent silver wedges from pre-2007; and Plein Sud heels from 2001. I’ve almost relinquished those Plein Sud heels a few times because no one has been able to fix the ripped-up toes, but now I’m glad I still have them so Cobbler Concierge can take a shot at the repair.

I figure it’s natural for a fine-jewelry designer to be attracted to other metallic accessories, though my white metal of choice for jewelry is platinum, not silver, and I actually prefer working in 18K gold. I still treasure a pair of gold Prada heels I got in 2011.

One pair of gold shoes that didn’t thrill me was a pair of Puma sneakers I got in 2016. I was initially intrigued by the high-shine gold and chunky sole, but they failed to turn me into a sneaker enthusiast. No surprise, because I’ve never been a flat-shoe fan, period. (The only sneakers I got genuinely excited about were the wedge sneakers that came out 10 years ago.) It took the presidential election of 2016 to force me to buy a pair of Uggs. The Orange Monster won and I was immediately like, “Oh, my worst nightmare is here — American fascism” and trudged out to buy a parka and boots appropriate for extended protest marches. It felt like the opposite of retail therapy; I found myself bitterly contemplating Henry David Thoreau’s phrase, “Beware of all enterprises that require new clothes.”

As longtime readers know, I haven’t stopped marching for democracy since — and even in my unloved flat shoes/sneakers, I’ve lost a couple of toenails and once got a blister so large it required a telehealth consultation. But the gold Pumas never made it into my protest-shoe rotation. I tried to sell them. I even tried to give them away. But they obstinately stayed in my possession, gathering dust until I read the WSJ’s silver-shoe article. The thought of silver led to thoughts of gold, which led to thoughts of, “I’m resigned to wearing sneakers now, so let me try these again.” My Instagram followers approved …

All of this shoe business — taking pairs to the cobbler, photographing other pairs, trying the sneakers on — resulted in my reorganizing my closet. Reorganizing led to a peak slow-fashion discovery related to the white Celine boots seen in the photo below, when they were new in 2013.

It wasn’t the boots themselves that gave me the unexpected thrill, just because I’d never lost track of them or fallen out of love with them. In fact, I was so fond of them that I kept them in their original box to try to protect them from damage. After my good experience with Cobbler Concierge, I took them out to assess their condition, and that’s when I was saw the original price tag.

You can see a better close-up on my Instagram feed — though it’s still blurry because the tag was falling apart in my hands — but I did indeed get these boots from Bergdorf Goodman for $75 down from the initial price of $1,250. Oh Em Gee! What a score! I had completely forgotten about that. So, not only did I “shop my closet” in recent days, I shopped an amazing sale and wound up smiling all day. Pack rats for the win! People who don’t keep shoe boxes for nine years have no idea what they’re missing, poor things.

NOTE: I had so much fun writing a fashion post instead of a political post, but I’m going to ruin it by linking you to the weekly activism newsletter that I wrote before I did this. There’s something for everyone here, regardless of where you live and how much spare time you have. If you need a two-minute action, I’ve got a two-minute action for you!