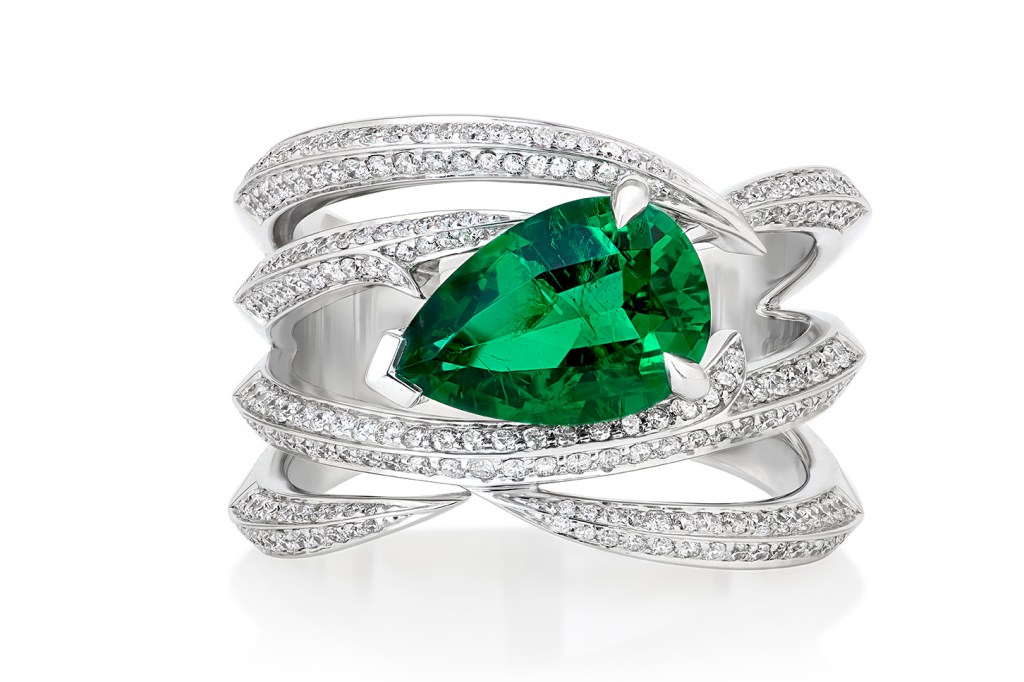 LONDON — There is immersive retail, and then there is Stephen Webster, who is coming up with all sorts of unconventional ways to connect with clients.

For years Webster put off designing an off-the-shelf bridal collection because he thought it was “the most boring creative category you could ever enter.” When he finally did bridal, he went all the way.

He called his concept the “No Regrets Chapel,” and decided to become a minister of the nondenominational Universal Life Church. He has a dog collar, carries his qualification card in his wallet and is qualified to officiate weddings.

“If we do something, we have to do it in our way — and I always have to work with a narrative,” said Webster from his second-floor salon on Mount Street in London, not far from Berkeley Square. “I thought to myself, ‘If we have a chapel, then we’ll need a minister.’ So I became one.”

He was ordained last summer — and the decision had nothing to do with his imminent trip to the wedding chapel capital of Las Vegas for JCK Couture, which he’s attending for the first time since 2019.

Last November, not long after his ordination, Webster opened a bar with live music in Nashville, Tennessee. The bar is based on the “No Regrets” lounge at Webster’s former Rodeo Drive store and the concept later traveled to Design Miami and landed at Bergdorf Goodman as a pop-up in 2019.

On Rodeo, “it was the sort of place where you’d be entertained and surprised — and there was never any jewelry in it,” said Webster. “I’d bring in chefs, artists, musicians, DJs and photographers, and they’d chat in the lounge. It was hospitality.”

The “No Regrets” lounge is a red neon sign suspended over a fully-stocked bar adorned with exotic, cut glass ice buckets; engraved glasses, and cocktail tools, too, all of which are designed and made in-house. There are bottle stoppers with intricate eagle head designs and ice picks, tongs and strainers adorned with silver rattlesnakes, rabbits and cows.

During lockdown in 2020, Webster entertained guests at his at-home lounge on Zoom. He served up a cocktail of lemon juice, Crystal Head vodka and Blue Curacao liqueur that mirrored the color of the large turquoise stones on his Crystal Haze cocktail rings.

The chapel, the lounge and the renewed focus on vibe rather than product is the way forward for Webster, who’s eager to expand in the U.S., which is now his largest market.

He’s keen to replicate what he’s done in Nashville, where he opened the bar right near one of his long-standing stockists. His idea is to focus on hospitality and experience, with jewelry, homeware and his relaunched men’s collection playing a supporting role.

He believes the chapel and the lounge allow him to have different types of conversations with retailers. He doesn’t want to be part of a counter in a shop. Instead, he wants the bar to sit by the jewelry cases “and show my expanded world. I don’t want to go back to doing just one thing,” said Webster.

The U.S. was, until recently, the brand’s number-two market after Russia, where he had a large following. Earlier this year he opened a shop and “No Regrets” lounge in Moscow.

His wife, and right hand, Assia Webster is Russian and the brand’s ties to the region were strong. Like other British companies, the brand has stopped trading in the region and Webster said shutting in Kyiv, Ukraine, was particularly painful.

“It was a massive blow, emotionally, too. We had the new store in Moscow, but we’ve also had a store in Kyiv — and the same staff — for 16 years. They’ve gone from being ordinary, normal women to being refugees. It was all very difficult for Assia and for my younger daughter, who was living in Moscow.

“It was a tough period, but as a business we needed to get on with it and to refocus. America is the obvious place to start because we’ve got such a long history there,” said Webster, adding that while he still does business with Bergdorf Goodman in New York, he’s eager to expand to growing cities in the south and Midwest, such as Nashville, Miami and Columbus.

Webster’s designs have long been popular in the U.S., and with musicians in particular: More than 25 years ago his Crystal Haze chunky cocktail rings became popular after Madonna bought a silver obsidian one and was photographed next to her former husband Guy Ritchie wearing it on her index finger.

Christina Aguilera has worn Webster’s designs onstage and, most recently, Machine Gun Kelly asked him to design an engagement ring for his fiancée Megan Fox. Webster said the American hip-hop star, whose real name is Colson Baker, wrote a “dark fairy story,” in verse, to describe what he wanted.

“I wanted the two pear shapes to lock together and form a sort of obscured heart. It’s super-romantic because he’d given me this kind of gothic-y, romantic poem,” said Webster.

Baker posted details of the engagement ring to his more than 10 million followers on social media, and Webster said since then he’s been inundated with requests.

Webster will be taking the design to Vegas, along with his new Thorn Embrace collection, which melds his signature thorn motif with pear-shaped diamonds, emeralds, spinels, tanzanites, tourmalines, and garnets.

The Thorn Embrace jewels are made from 18-karat recycled gold and Webster has an exclusive collaboration with traceable Muzo emeralds from Colombia.

He has long been at the forefront of sustainable jewelry design and has collaborated with Swarovski lab-grown diamonds. A few years ago he came out with the Last Straw, a sterling silver straw he designed as a statement against the use of plastic straws, with a portion of sales going to Plastic Oceans International.

Webster won for a variety of reasons, including the brand’s efforts to source sustainably and to repurpose materials; its use of renewable energy on the Mount Street premises, and its target to halve carbon emissions by 2030.

In September, he plans to launch a collection of “carbon-negative” diamond jewelry in collaboration with a British company that makes stones under the name Skydiamonds. The diamonds are made by capturing carbon from the air and processing it with wind power. It takes about 14 days to make a diamond weighing 1.5 carats.

Webster said Vince has been perfecting the diamond production process for seven years and that he’ll be the first jeweler to use Skydiamonds’ “white, lovely, beautiful stones.”

Webster is starting with a capsule collection of five cuts for his bridal offer and wants to speak specifically to Millennials and younger customers. The bridal collection is just the beginning, Webster added.

“I think these diamonds have potential for the green carpet. I’m also making huge titanium earrings, too, because I want to spread the word.”