Flashing the flesh: what’s behind the new barely-there 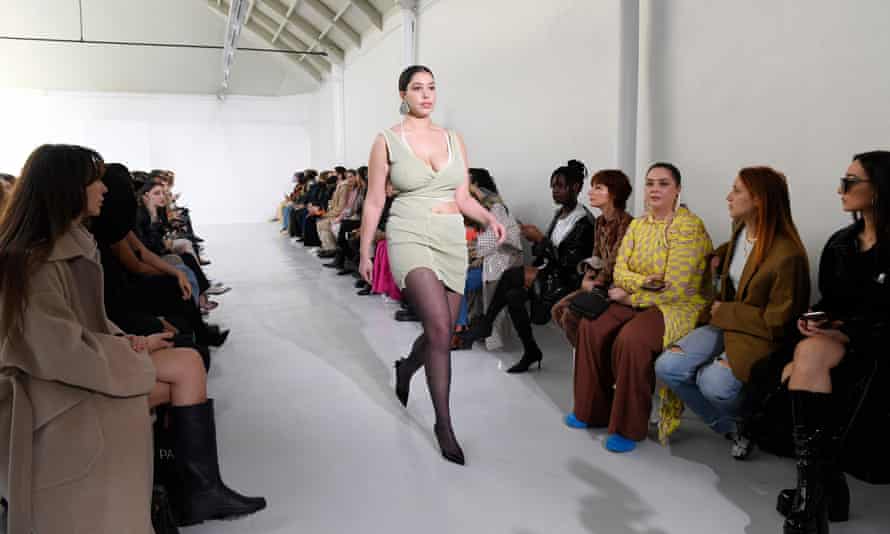 Many column inches have been filled this week with what was worn at the Met Gala on Monday. But what about what wasn’t worn? Cara Delevingne went topless bar some gold paint and a couple of nipple protectors, while Gwen Stefani wore a strapless acid-green bra and matching ball skirt. Adwoa Aboah’s see-through crystal bra was more see-through than crystal. Could it be that clothes have fallen out of fashion?

According to a new trend report from Clearpay, a payments platform and sponsor of London fashion week, “the sexy silhouette trend that bubbled up at the start of the pandemic is evolving into ‘barely there’ clothing, with lingerie styles creeping into everyday wear.” This season has seen “naked” cut-out dresses from Nensi Dojaka, Cult Gaia and the size-inclusive label Ester Manas, bikini ball gowns at Valentino and Vera Wang, and Miu Miu’s ultra-cropped tops and micro minis.

Fashion historian Dr Kate Strasdin of Falmouth University draws a parallel between today’s financial adversities and those of the Great Depression. It’s not unusual to see a “spike of glamour” during hard times, she says, which may explain the current trend for flesh.

“In the 1930s, there was a devil-may-care attitude,” she says, with similarly “revealing, form-fitting dresses that would be worn without underwear. Being on show was a big thing during the Depression. It was a celebration of the visibility of the human body, and a rejection of all those privations.”

The modern-day equivalent, says Laura Yiannakou of the trend-forecasting agency WGSN, is “sweatpant fatigue and a rejection of stay-home style, which goes hand-in-hand with a new era of hedonism”.

Yiannakou adds that these barely-there looks are a clear reference to the 1990s, when underwear was worn as outerwear and dresses were inspired by lingerie, Tom Ford sent a naked bottom down the catwalk (save for a Gucci G-string) and Alexander McQueen created bottom cleavages with bumster trousers.

Flashing the flesh is also about “using the female body as a shock tactic”, says Strasdin. “For example, bumsters were about outraging the establishment.” This time round, it’s about rattling the patriarchy. “Post #MeToo, women are saying, ‘I can celebrate my body by wearing whatever I want,’” she adds, “and that doesn’t mean it invites unwanted access.”

The no-clothes trend “taps into a new era of power dressing”, says Yiannakou. “It’s modern feminism, celebrating the female form in all its shapes and sizes, and unapologetically so.”

Some are, predictably, more cynical. “This is not about feminism,” says Dr Kirsty Fairclough of Manchester Metropolitan University, but a “desperate attempt by celebrities to revive their brands”. Referencing a New York Times article that maintained celebrity culture was redundant, Fairclough said, “The world’s burning, and you’ve got Kim Kardashian flying her friends to a private island in the middle of a pandemic. The celebrities are trying to regain their relevance by baring flesh, and it’s deeply problematic.”

To Fairclough, such exposure is about gaining, well, exposure – it’s simply a business strategy. “Social media is such a noisy place now,” says Yiannakou. “This whole flash-flashing thing is done to garner attention.”

Clearpay’s data suggests that this trend is already trickling down to shoppers, with ultra miniskirts, cut-outs and super sheer skirts all topping its clothing searches. Clearpay’s fashion psychologist Shakaila Forbes-Bell concedes that it’s easier for celebrities to “get away with barely-there fashion, because they’re less bound by social norms; they don’t have to do a 9-5”.

Celebs may be experimenting with exposure but “let’s be honest,” says Yiannakou. “We’re not all going to be wearing tiny bras and micro minis. The willingness to give up comfort altogether is not quite there yet.”

In fact, she adds, WGSN has recently identified a new trend which they’re calling “comfy party”, where skimpy, “going out-out” clothes are paired with slouchy cardies and drawstring waistbands. “It’s still rooted in a comfy night out.” Phew.